Gearing up for Panto Season...

As we finally emerge into a very frosty December, there is only one thing on the minds of anyone who works in theatre - no, not Christmas but Panto Season!

Panto Season has always been the busiest time of the year for us. All our backcloths are regularly booked almost a year in advance, and we spend the months leading up to December having to fend off phone calls from people trying to book pantomime kitchens, woods, Cinderella coaches and beanstalks at the last minute.

This year we are particularly excited as not only are we looking forward to Panto Day on the 12th December, but we are also starting to gear up for the release of Kenneth Branagh's new live action adaptation of 'Cinderella'. We posted the official film trailer on our Facebook page last week - but today also saw the release of the official film posters - a chance to admire the exquisite costumes, opulent settings and all-star cast! 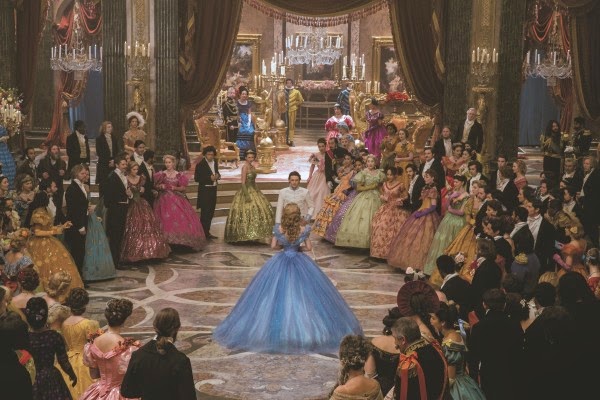 Long before Anna and Elsa from box office phenomenon 'Frozen' came onto the scene, Cinderella has reigned supreme as the nation's most popular panto princess. In fact the recently revealed statistics from the National Database of Pantomime Performance and first ever National Amateur Panto Survey show that 'Cinderella' managed to beat off competition from rival princesses 'Sleeping Beauty' and 'Snow White' to remain the people's princess, and only very narrowly missed out on the top spot, which went to 'Aladdin'.

'Cinderella' has always been a popular pantomime to perform as it is guaranteed to sell tickets. Many a little girl and boy has looked on in awe and wonder as the Fairy Godmother transforms Cinderella from penniless servant into the belle of the ball, and this moment in the Disney film is still remembered as a wondrous and inspirational sequence of animation. After watching the Disney film or seeing a performance at the theatre who doesn't want to find their Prince Charming and have their own Cinderella moment? 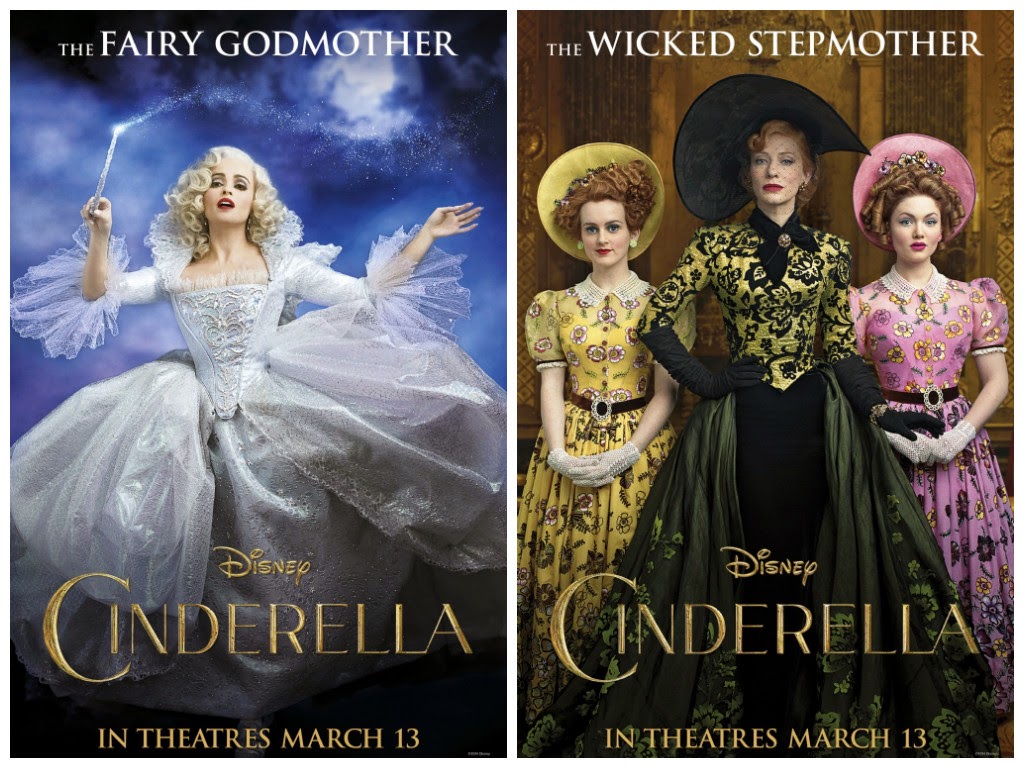 From watching the trailer Kenneth Branagh's film certainly doesn't look set to disappoint - with an all star cast featuring many familiar faces from Downton Abbey and Game of Thrones - as well as Hollywood veterans Cate Blanchett as the Wicked Stepmother and Helena Bonham Carter as the Fairy Godmother, 'Cinderella' also looks to be a great showcase for emerging British acting talent. Although a whole host of starlet's and more-than familiar-faces are rumoured to have auditioned - including Harry Potter alumni Emma Watson and The Wolf of Wall Street's Margot Robbie, it was Downton's Lily James who was picked for the title role - and although this isn't her first foray into film this is certainly her first real blockbuster role. 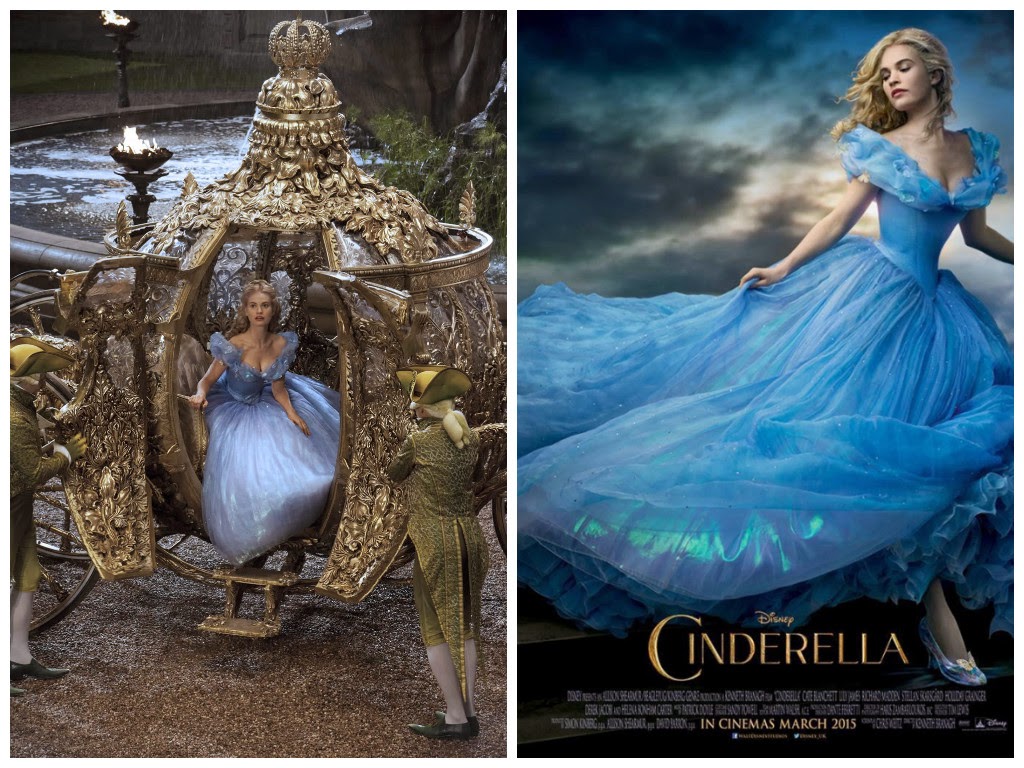 From the official film trailer and the promotional pictures that have been recently released it is clear that we can expect a real visual masterpiece. Although we can't comment on the standard of acting until we've seen the film (although with cast members including Cate Blanchett, Helena Bonham Carter, Derek Jacobi and Kenneth Branagh at the helm, I'm sure we're in safe hands!) we can definitely comment and say that the costumes and settings look phenomenal. We ooohed and aaahed when we saw the first image of Cinderella's gilded carriage, and it's wonderful to see Cinderella's beautiful, and iconic pale blue ball gown brought to life.

Of course - 'Cinderella' isn't the only show to get the Hollywood treatment this year. With last summer's release of 'Maleficent' starring Angelina Jolie -an adaptation taken from the original story of 'Sleeping Beauty', and the upcoming 'Into the Woods' film which features another all-star cast, including Meryl Streep, Johnny Depp and James Corden to name just a few, it seems that cinema is having a bit of a moment in revisiting classic fairy tales and musicals. Another Disney favourite 'Tarzan' is set to be remade, and plenty of rumours are circulating across the internet that 'Wicked' is set to be the next Broadway show to be remade for the big screen. In reverse, in 2014 it was hard to avoid the behemoth that was the box office smashing, record breaking 'Frozen'.


Apparently there are already talks happening on Broadway as people hope to capitalise on its seemingly unwavering popularity and put together a stage show version. Even now, nearly a year after it's original release, cinemas are still successfully putting on 'Sing a Long' Frozen screenings so we're sure any show that features Queen Elsa and her singing snowman Olaf would have swarms of little girls begging their parents to buy tickets - only last week I walked into Tesco to see they had put on a 'Frozen' party and the small children of the Scottish Borders, boys and girls alike, were queuing up to have their faces painted and buy yet more 'Frozen' merchandise - lunch-boxes, wigs, hair clips and party plates. If it has Elsa's face on it then it's in high demand this year for Christmas.
As it happens, Disney has played a clever card to guarantee that people go see 'Cinderella' by announcing that a 'Frozen' short will play before the film - we're sure that will be leverage enough to persuade plenty of little girls to go pester their parents to book cinema tickets!


However, as theatre and film fanatics this is no bad thing. We love that these films are being remade into live action movies! It gives us a chance to drool over the big budget costumes and sets and provides us with plenty of inspiration from which to design or enhance our own sets. I think the release of these films will also help rejuvenate flagging theatre audiences - little girls who go see 'Cinderella' at the cinema may ask their parents to buy tickets for the local panto, and families may even decide to go see a show together later in the year. Hopefully, with cinema revitalising these old musicals and stories it helps bring new audiences back to the theatre to see the same shows performed locally, and I'm sure with some clever promotion local theatres can capitalise on any box office successes and trends.

We are sure that this will be a year that we will see lots of little girls and boys queueing up to see the local pantomime with their parents, proudly wearing their Cinderella, Rapunzel and Elsa costumes and frantically waving around their flashing wands and swords. Let's hope that this new interest taken by Hollywood helps bring audiences back to their local theatres and we see a renewed interest in the Arts and the Theatre - especially in the face of government cuts to this area.