We know, we know- It’s almost Spring! But whilst being bombarded with storms and snow what better time is there to have a look back over the past few months with our Winter Round-Up?

Many people would call the run up to Christmas and New Year the festive period, however those of us who are lucky enough to work in theatre know it simply as ‘panto season’.
Whilst we work hard throughout the year, Panto season is without a doubt the busiest time for us. The phone is never not ringing, our inboxes fill up with frantic emails and we are all up to our elbows in glitter and gold paint as we jazz up all the scenery ready to go out to pantomimes across the nation.
We were incredibly busy this season with many of our most in-demand cloths being booked for this year as early as last January so if your society is planning on doing a pantomime and you’ve seen a cloth or a set you really like please get in touch now so as to ensure you don’t miss out. We’re not joking when we say our booking book is already filling up fast!
This year we supplied to over 148 different pantomimes all across the country, from Redruth Amateur Musical and Pantomime Society in Truro Cornwall who did 'Dick Whittington', to Runway Theatre Company in Glasgow with their production of 'Mother Goose'. We even supplied as far afield as Act One Youth Theatre in Sutton and St Stephen's Players in Guernsey, both of which performed 'Aladdin'.

Of course what makes the hard work and long hours so worthwhile is being able to see our scenery in action. We’ve received some fantastic pictures of our sets this year so thank you to all who sent them in, and this year we were kindly invited by FMC Technologies to see their dress rehearsal of ‘Hansel & Gretel’, a funny, fast paced show that had us up on our feet dancing and clutching our sides with laughter.

With a talented and enthusiastic cast that included some strong, confident singers this was a very polished show with only a few dress rehearsal hiccups.
The two-standout stars of the show were undoubtedly the Panto Dame Miss Demeanour and the Village Fool Willie. This was a very successful double act pairing as these two provided the jokes and the slapstick, and their characters comical moments were only enhanced by an array of ridiculous costumes. Miss Demeanour has one of the largest wardrobes I’ve ever seen for a panto dame with over three different brightly coloured and eccentric ensembles, while Willie seemed to have a range of professional positions from schoolboy, to truant officer, to girl guide! 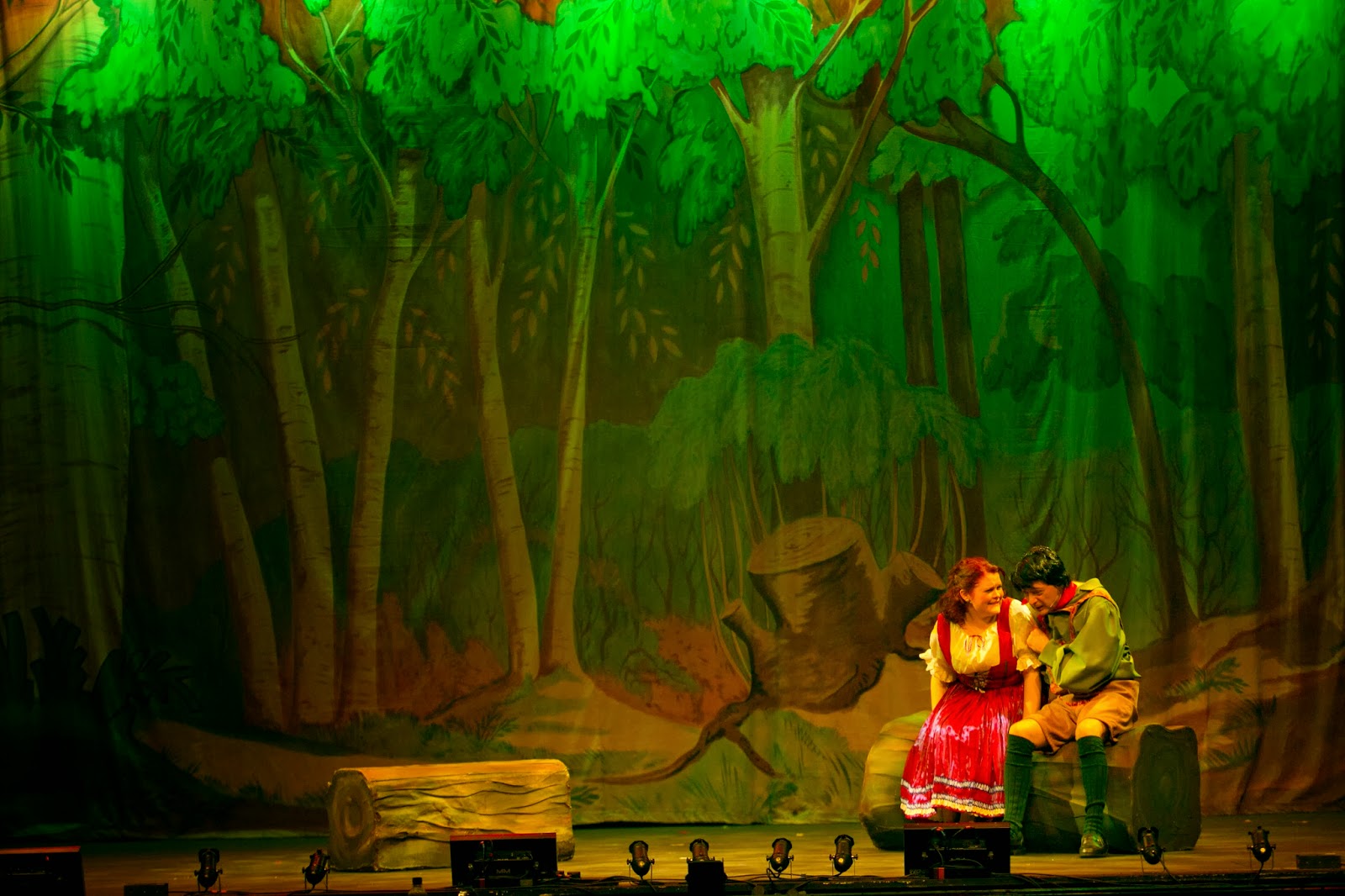 With a large cast it was good to see both the chorus and also the children in the production being used in a number of different ways. For me one of the real highlights was the rendition of ‘What Does The Fox Say?’ which began with a townsperson belting out the opening lines as the rest of the village searched the forest for the missing Hansel and Gretel, and quickly turned into an ‘awhh’ moment as the children all came tumbling onto stage dressed in some very adorable fox costumes.

It was quite an extensive script which involved a lot of different scene changes but they were all carried out smoothly and efficiently and the pace remained quick throughout the show with the cast managing to keep hold of the audiences  attention. 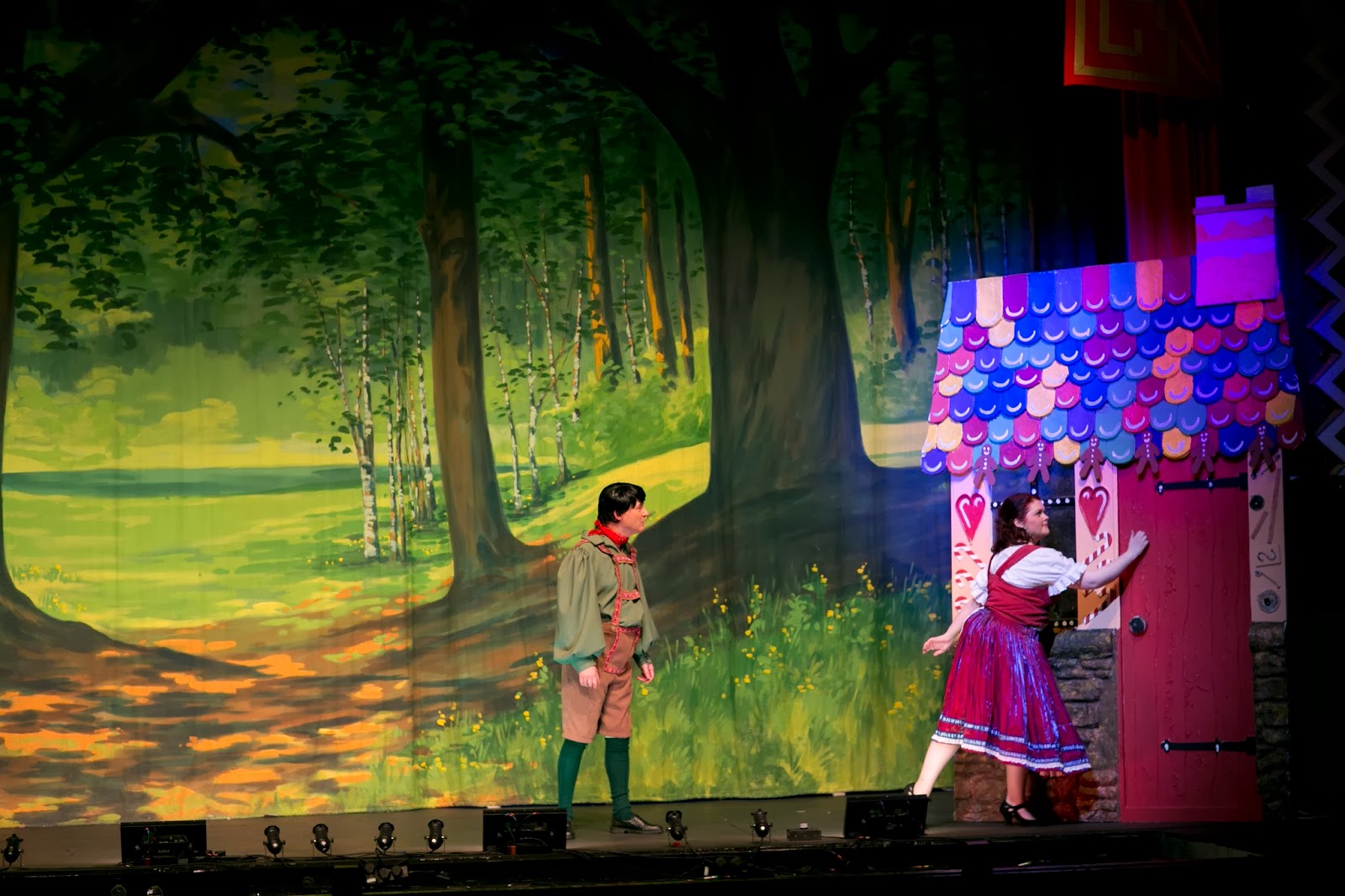 With it being just their dress rehearsal we had expected that there would only be a few people watching and that, of course, there would be a few technical hiccups as first night nerves set in - however we didn’t expect to find ourselves almost falling out of our seats with laughter. I can’t express how funny this show was and we had a truly great evening out enjoying some fantastic panto entertainment.

It was also a treat for us to be able to see our set in action, especially as the show included one of our brand new cloths the Gingerbread House Interior, which received glowing compliments from the cast and crew we spoke to, as well as the newly updated Lichtenburg Tabs which have now been transformed into Hansel & Gretel show tabs.
The scenery looked fantastic and really added to the show with the vivid colours of the cloths working well with the beautiful costumes supplied by Utopia Costumes. The dimly lit dark forest cloth was particularly effective in creating a spooky, claustrophobic atmosphere for when Hansel and Gretel get lost in the woods, whilst the scenes in the village remained bright and cheerful.

All in all this show was a great success, and the hard work all the cast and crew had put in had definitely paid off. We thoroughly enjoyed ourselves and were made to feel very welcome by everyone.
We can’t wait to see what you put on next year!

Huge thanks and big congratulations go to Malcolm Burnett, and the rest of the cast and crew.

With thanks to EROS Musical Society & FMC Technologies for use of pictures
Posted by Border Studio at 10:42