Last week, we went to see Selkirk Opera's production of 'The King and I', here's our review

'The King and I' is a Rodgers and Hammerstein musical that was adapted from the original story of ‘Anna and the King of Siam’.
It was hugely successful and quickly became one of the world’s best-loved musicals due to the opulence of the setting, the comedic moments intertwined with romance and drama, and of course the great love between Anna and the King that neither can ever admit to.
The final scene between Anna and the King as he lays dying surrounded by his courtiers and family is so poignant that often there isn’t a dry eye left in the house, and the ballet ‘The House of Uncle Thomas’ is a beautifully composed and choreographed piece of theatre.
When first released the musical won several Tony Awards and the 1956 film adaptation featuring Deborah Kerr and Yul Brynner even went on to win an Academy Award, with Brynner receiving the award for Best Actor.
‘The King and I’ is one of my favourite musicals and therefore I had been especially looking forward to seeing Selkirk Opera’s production last week.

My first impression was that this was a well organised and well rehearsed cast. Every line was spoken very clearly and could be easily heard from where we were sat near the back of the Victoria Hall.
There were also no problems with people missing cues or forgetting lines, with every actor from the adult leads to the young children confidently knowing what they were meant to be doing and remaining in character throughout the whole performance.
I often worry when I see shows about the children that are involved – ‘The King and I’ is an incredibly long show and it is easy for a young child to get bored whilst on stage and start fidgeting but all the children who were involved in Selkirk Opera must be commended on their commitment to their roles, and also for not being visibly self aware or getting embarrassed.

I was very impressed by the singing ability of the actresses playing Anna and Tuptim. All the leads did a good job of confidently leading the show and keeping the pace going. The King commanded the stage with an authoritative presence whilst Anna was the sympathetic schoolteacher with a clear influence over her charges, but uncompromising when needed. Tuptim was played very convincingly and both she and Lun Tha had the audience rooting for them to make their escape.
However, a real standout performance was the ensemble of Royal Wives and their Head Wife Lady Thiang. Occasionally Lady Thiang can be played as quite a cold, calculating figure however with this performance I still felt like there was a real warmth to her character, alongside her commitment to doing her duty.
I really saw her as being a smart and powerful influence behind the King, but of course being clever enough to advise subtly, while the Royal Wives provided a light, comedic foil to some of the more intense scenes. They worked well together with the children and were a real asset to the overall show performing a rousing rendition of 'Western People Funny'.
We were also very pleased to see Lewis Wilde give a very convincing performance as Prince Chulalongkom. Lewis has previously done work experience with us here at The Border Studio so it was fantastic to get to see him in the spotlight. He worked very hard and left a great impression on us all during his week and after seeing him paint scenery in overalls we almost didn't recognise him up on stage in his costume! 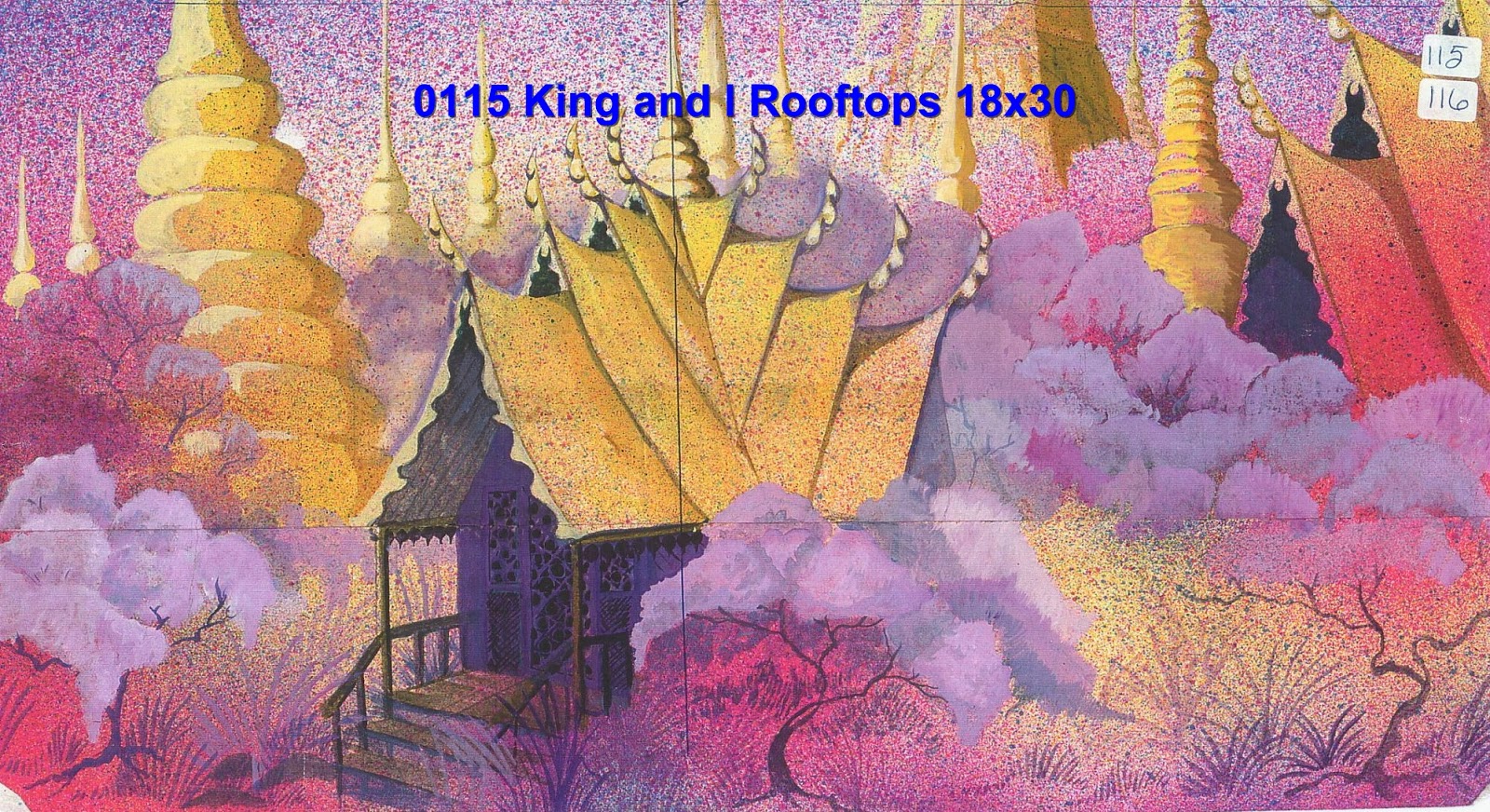 The lighting and the costumes complimented our scenery very well and visually I thought the show looked magnificent. The use of Backcloth No.115 King and I Rooftops behind our red and gold King and I flats really created an opulent vision of Siam, and there was a good use of staging. The inclusion of our pair of beautiful Foo Dogs on plinths, book shelves and a decorative throne on a dais, or the Gold Buddha centrepiece and even the small sets on either side of the extended stage sides were used wisely to cleverly create all different rooms in the palace while still using the same core set.

Overall, we really enjoyed ourselves whilst watching the performance. The orchestra played beautifully throughout and we often found ourselves nodding our heads or tapping our feet along with the music. The ballet of The House of Uncle Thomas was a particularly engaging sequence that had been choreographed well. In fact, the only downside to the whole evening was our lack of success in the raffle!
A huge congratulations go to Selkirk Opera on a successful show!

If you or your society is considering putting on The King and I then please get in touch with us and I can send you a full colour brochure which includes pictures of our set in action, full stage plans as well as lists of the props and furniture that we have available to hire for this show.

We offer a completely flexible service and you only need to hire what you want – whether that is a full show or just a few small props. Get in touch with us today to see how we can help you.
Call us on 01750 20237
Email us at info@borderstudio.com
Or visit our website here