You're Never Fully Dressed Without A Smile!

This year Selkirk Amateur Operatic Society very kindly gifted us with some complimentary tickets for their production of 'Annie'.
Every year 'Annie' has remained as one of the top five most performed musicals in the UK, along with other classics such as 'Guys & Dolls' and 'Oliver!'. 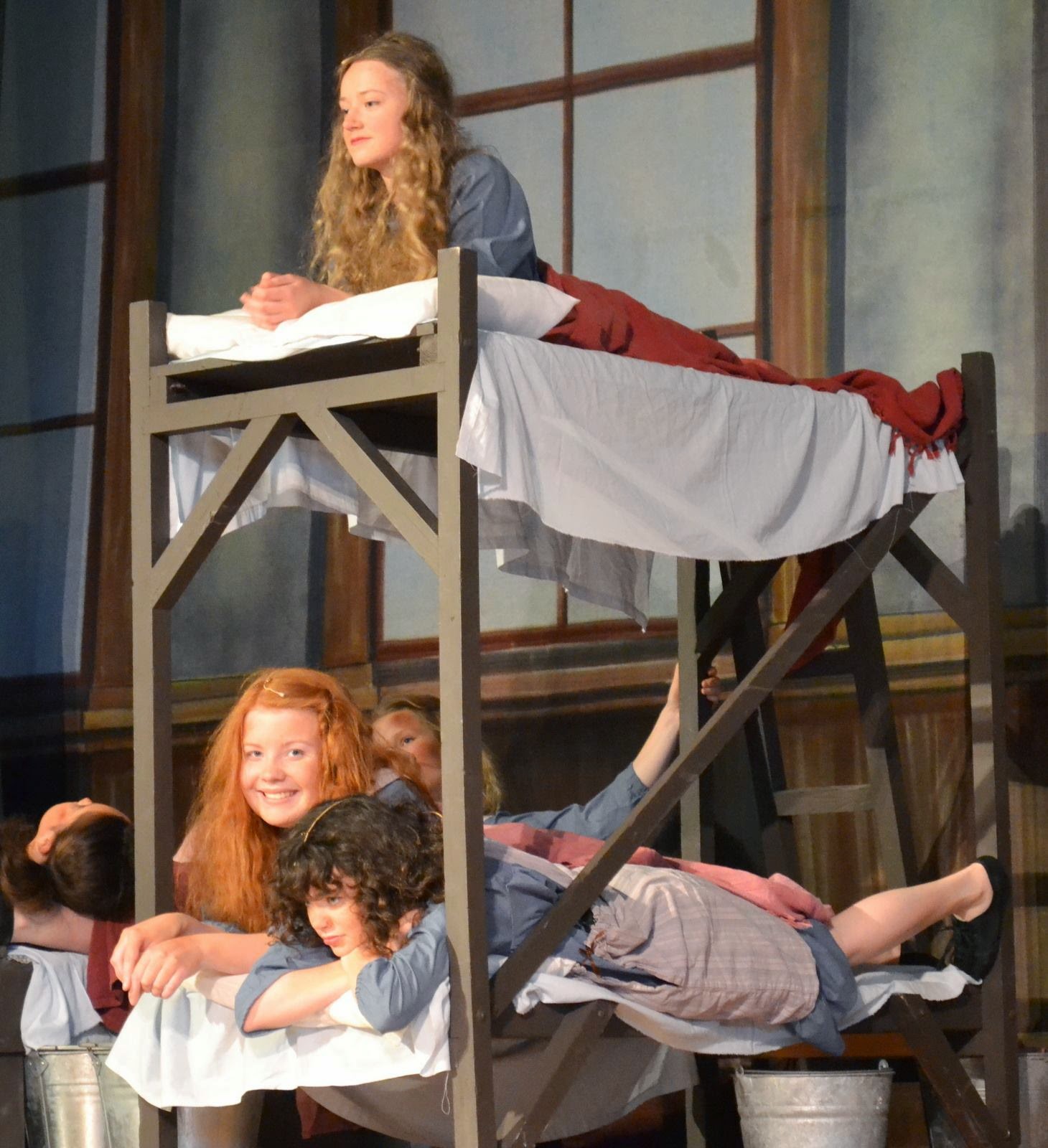 It's hard to really pinpoint what makes a musical so popular - in the office we all have our own favourites (mine's A Funny Thing Happened On The Way To The Forum!) however dealing with enquiries on a daily basis means we do see see patterns and trends that emerge over the years. If you visit our historical timeline on our website you can even see what the top musicals were for each decade. However, 'Annie' has always been slightly different as despite what the trends are for that year, 'Annie' has consistently remained within the top five most performed musicals.

Seeing Selkirk perform 'Annie' made it clear why the musical is so popular. Simply, it's a real 'feel good' musical with plenty of great musical numbers, a likeable lead character, and plenty of funny moments - even the 'bad guys' are, in their own way, endearing.
A huge bonus comes from the fact that there are also enough roles for a much larger cast - many of Selkirk's ensemble had a chance to portray their own characters at various points of the show instead of just being relegated to a few dance steps and chorus vocals at the back of the stage. 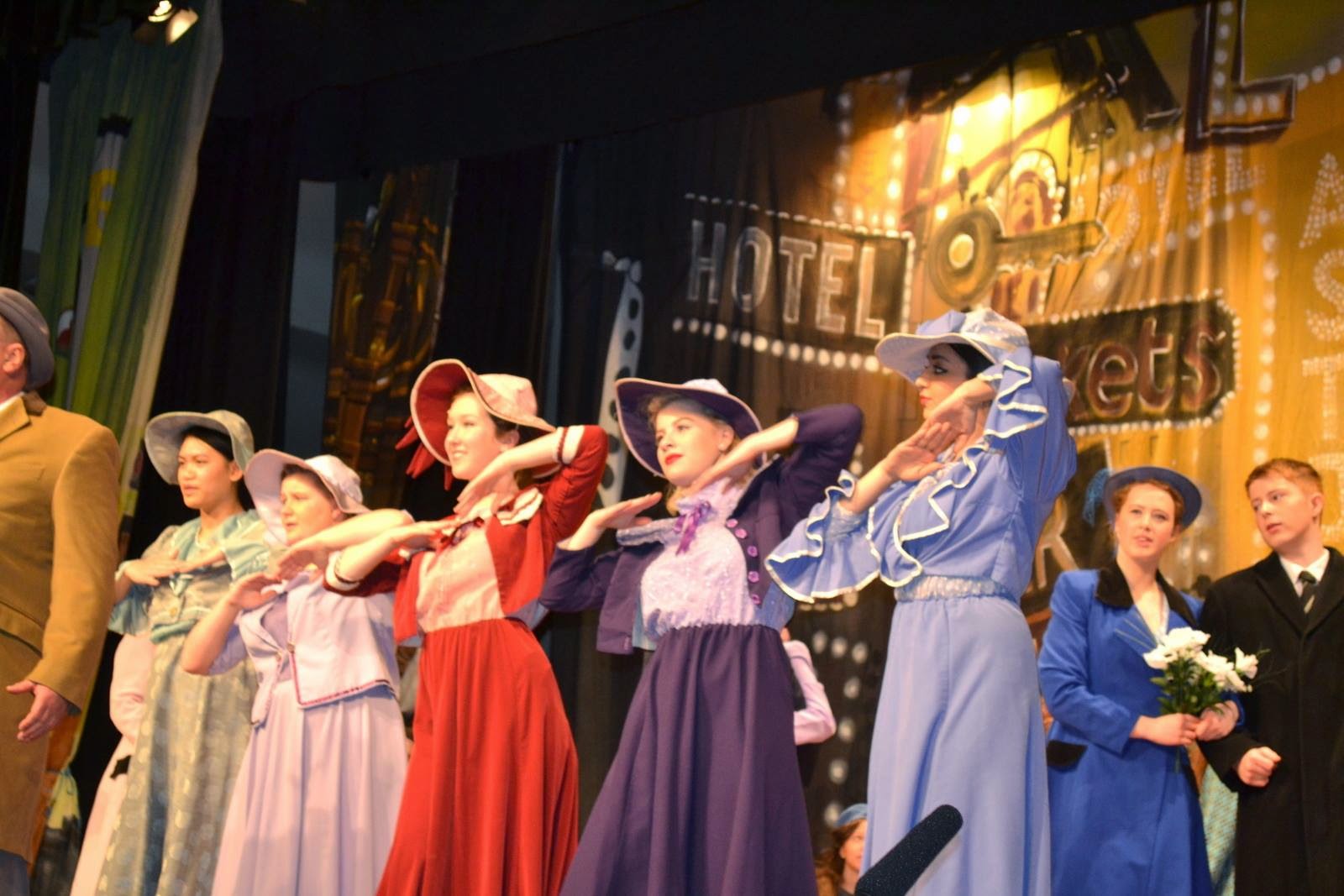 Whilst watching Selkirk, many individual performances stood out to me - Ian Wilson who played Radio Host Bert Healy had managed to capture that distinctively American smooth radio voice perfectly ('Oxident! Because you're never fully dressed without a smile!') and the dancers were well rehearsed, handling their routines with ease and keeping in sync with each other and the beat. Freya Hoppe and Ellen McFadzen both stood out as being particularly confident and comfortable on stage. Freya is a talented dancer who is able to maintain a beaming smile throughout the show - after months of rehearsals I'm sure she must have been feeling tired however she still looked fresh & like she was having the time of her life. Meanwhile Ellen had a real stage presence and had made a real effort with her hairstyle and makeup, which fitted the era perfectly & had been applied well.
A topic that Ewan from Utopia Costumes has touched on in his columns for NODA Today has been the importance of styling makeup & hair for the right era for the show. Every now and again we do still see examples of modern fringes, tans and makeup looks up on stage, whilst they undoubtedly make the person look great they're not always a look that is right for the era, or the character - imagine the Matchmaker from 'Fiddler on the Roof' appearing with bright red lipstick & a sideswept fringe.  Not only is it fun to try a new look from a bygone era but when hair is properly styled and the right makeup applied then it can really pull a costume and the whole look of a show together. It can even have that psychological effect of helping you become your character as you go through the application - however, this is probably a blog for another time! 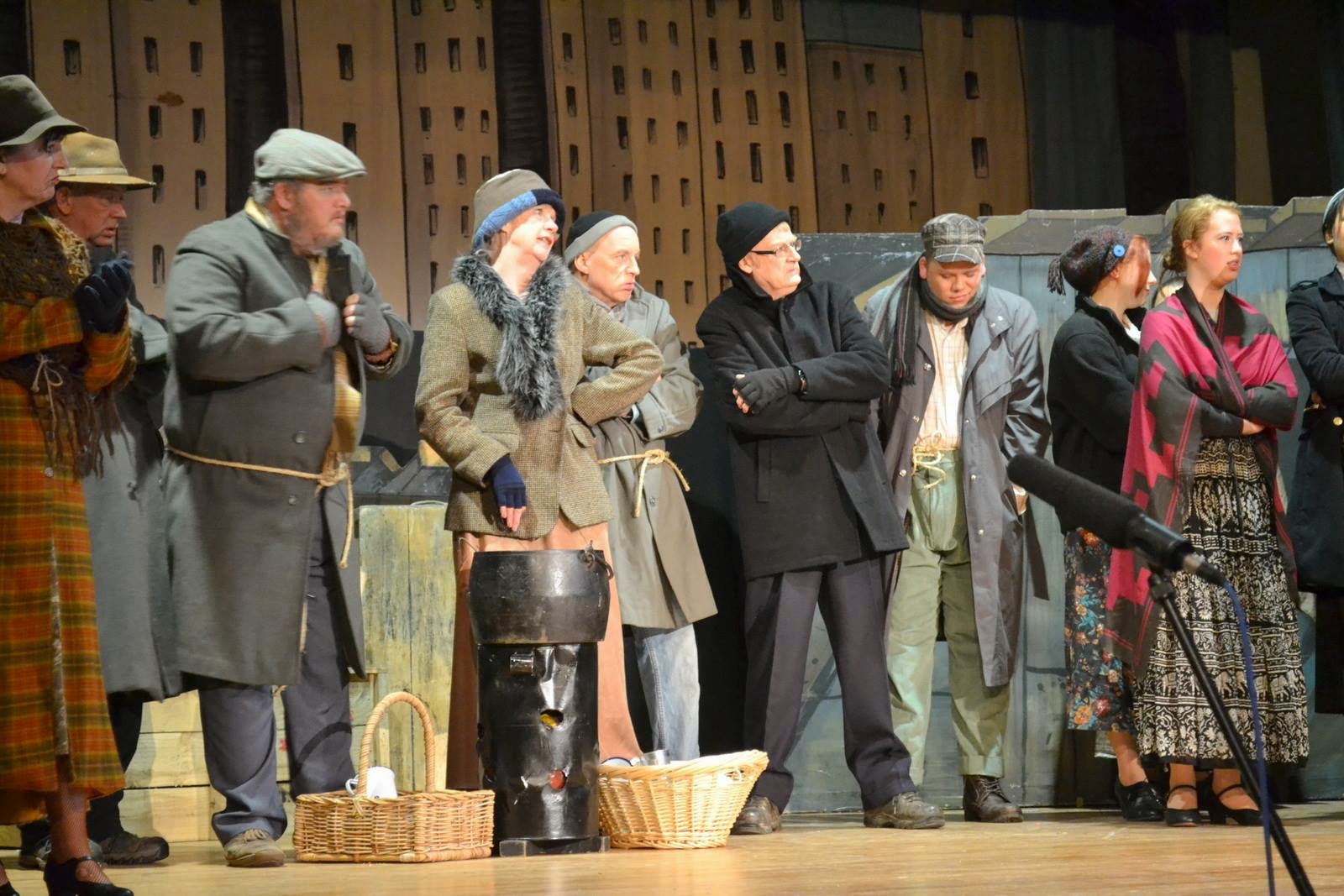 As we went on the Thursday night we saw Jess Thomson play little orphan Annie. We were both very impressed with Jess's performance - there are a lot of lines to learn and she didn't stumble once through the whole show & delivered them clearly & confidently. She pulled off Annie's sassy personality well, sweet talking the policeman to rescue Sandy the dog, and won the hearts of the audience alongside Daddy Warbucks & his assistant Grace. She also handled 'Sandy' (played by Meg the Border Terrier) well, although there was one very funny moment where Meg struck gold and managed to get her head in the pocket containing all the treats. What I initially thought was a lovely cuddle between dog and girl quickly turned into Annie having to wrestle Sandy as she tried to sing 'Tomorrow'. Whilst a nervous performer might have visibly panicked Jess didn't even flinch, managing to continue to deliver a perfect rendition of 'Tomorrow' whilst hauling Sandy away from the treats.
Jess also worked well with Grace played by Karen D'Agrosa. Karen's Grace was very likeable and managed to play sweet without being sickly, and was also one of half of a brilliant husband & wife team as her real life husband Raymond D'Agrosa played Daddy Warbucks. Raymond has a really fantastic voice and the developing relationship between little orphan Annie and her potential adoptive Father Oliver Warbucks felt authentic. Raymond also effectively portrayed the changing nature of Warbucks who grows from being a workaholic with no time to a loving Father who makes time. 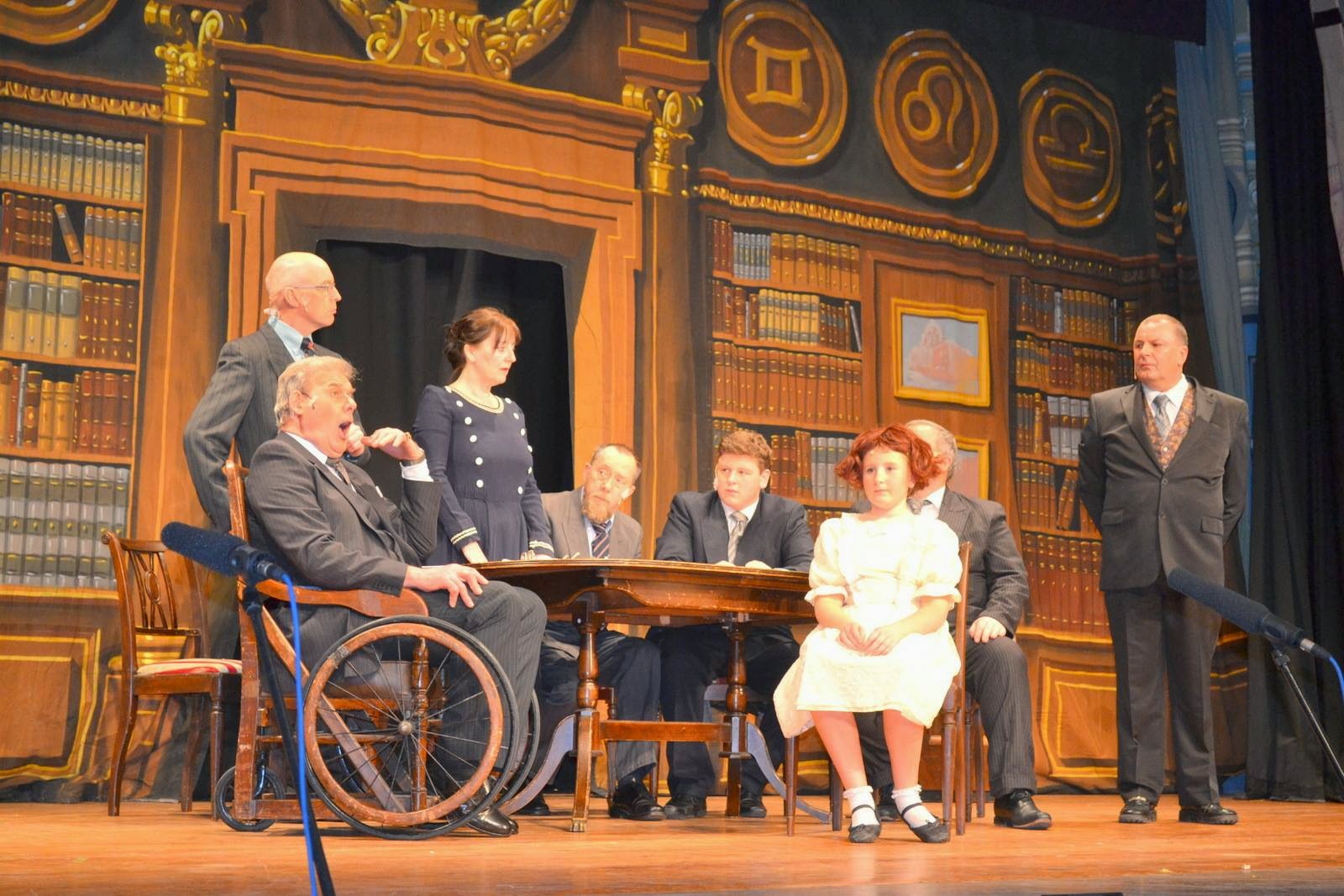 Last year's King from 2014's 'The King & I' had swapped his palace in Siam to the Oval Office in Washington DC to play the President Franklin D Roosevelt and did so with aplomb, and his Cabinet had the audience in raptures as they sang 'Tomorrow' together. Lewis Wilde and Kyle Fairbairn also did well to juggle multiple roles throughout the show - I am sure the many costume changes and different cues kept them on their toes for the six months of rehearsal!
For me however, the absolute standout stars of the show had to go to the comedic and dastardly trio of Miss Hannigan, Rooster and Lily St Regis (like the hotel!) who were played by Val McLean, Stuart Mitchell and Yvonne Mitchell. Val McLean stalked the stage like an exhausted hawk, clutching onto her 'medicine' and nursing her constant hangover. You almost felt sorry for her as she descended into madness during 'Little Girls'. That is until she teams up with her con artist brother and his latest squeeze in a plan to take up Daddy Warbuck's offer of a reward by pretending to be Annie's long lost parents - Mr & Mrs Mudge. Stuart Mitchell is a confident performer who played the despicable Rooster perfectly, balancing the badness with a touch of comedy and Yvonne Mitchell shone as Lily St Regis. With a girlish American accent and a squealing giggle just right for the character - think Shirley Temple on helium - Yvonne had the down-on-her-luck glamour girl with loose morals absolutely pegged. When the three performed 'Easy Street' it was with much hilarity. 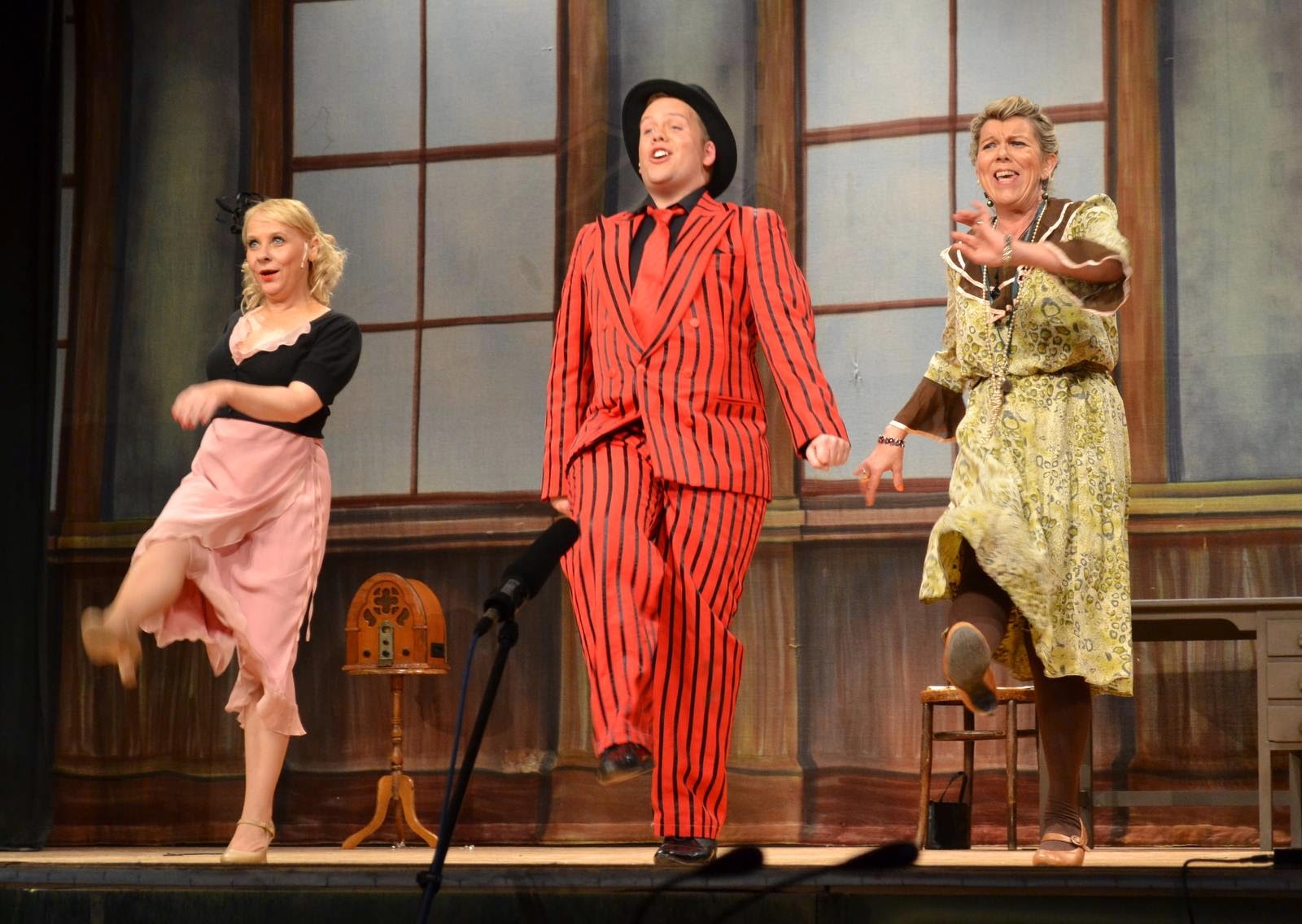 Overall Selkirk AOS put together a really fantastic performance of 'Annie' and it would be easy to just go through the entire cast listing all the positives. The children's cast gave a performance that was polished and professional, and the adults all performed well in their roles - often many of the supporting cast played more than one role but put their all into each one.
This was a very confident performance from Selkirk and there are several members of the cast who are starting to emerge as real stars - i'm sure it won't be long till we start to see some of the younger, newer members taking on some leading roles! Well done Selkirk on a fantastic show - we're looking forward to seeing what you do next year!

If you're thinking of doing 'Annie' for your next show then please get in touch to receive a full colour brochure of our plans and pictures. 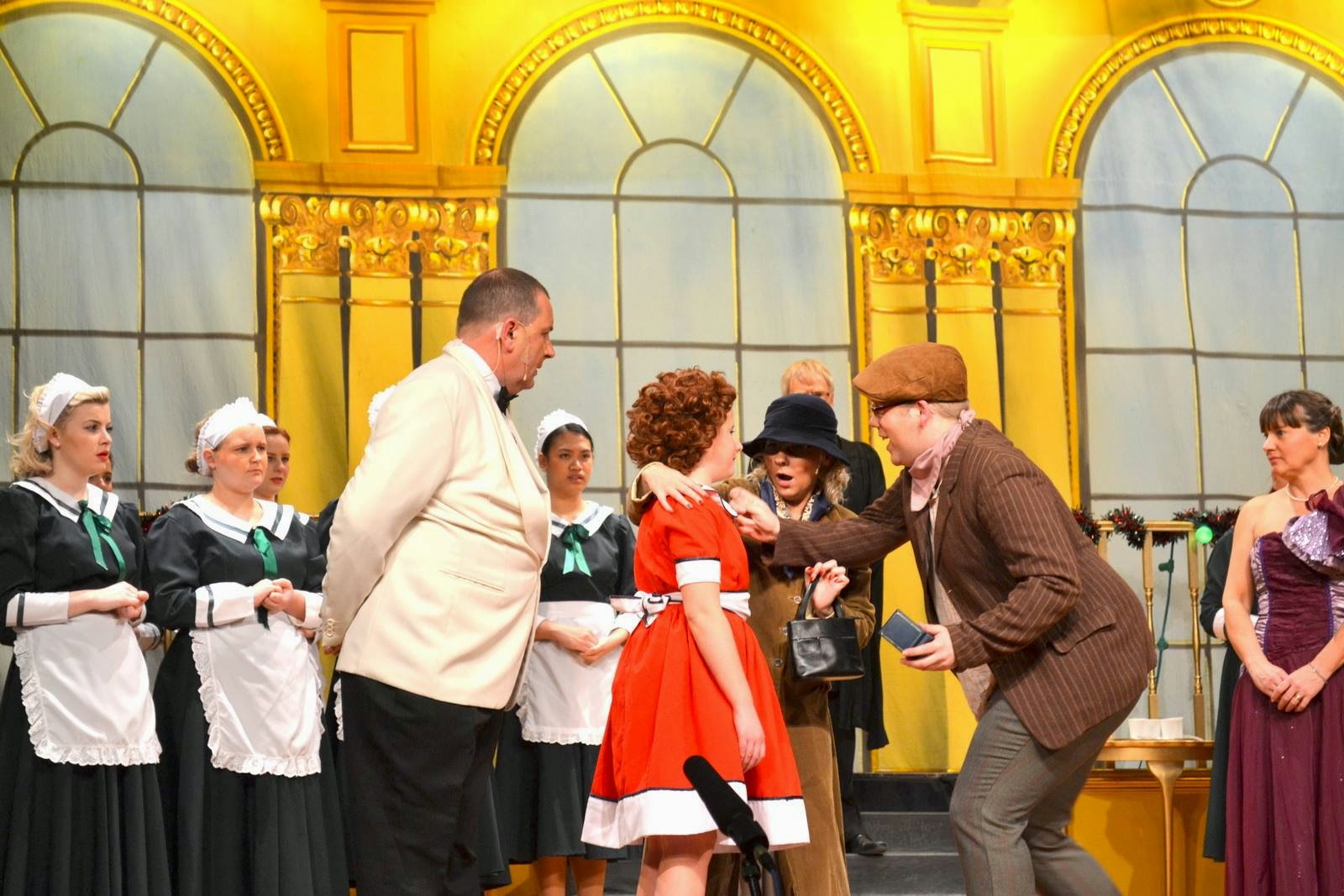 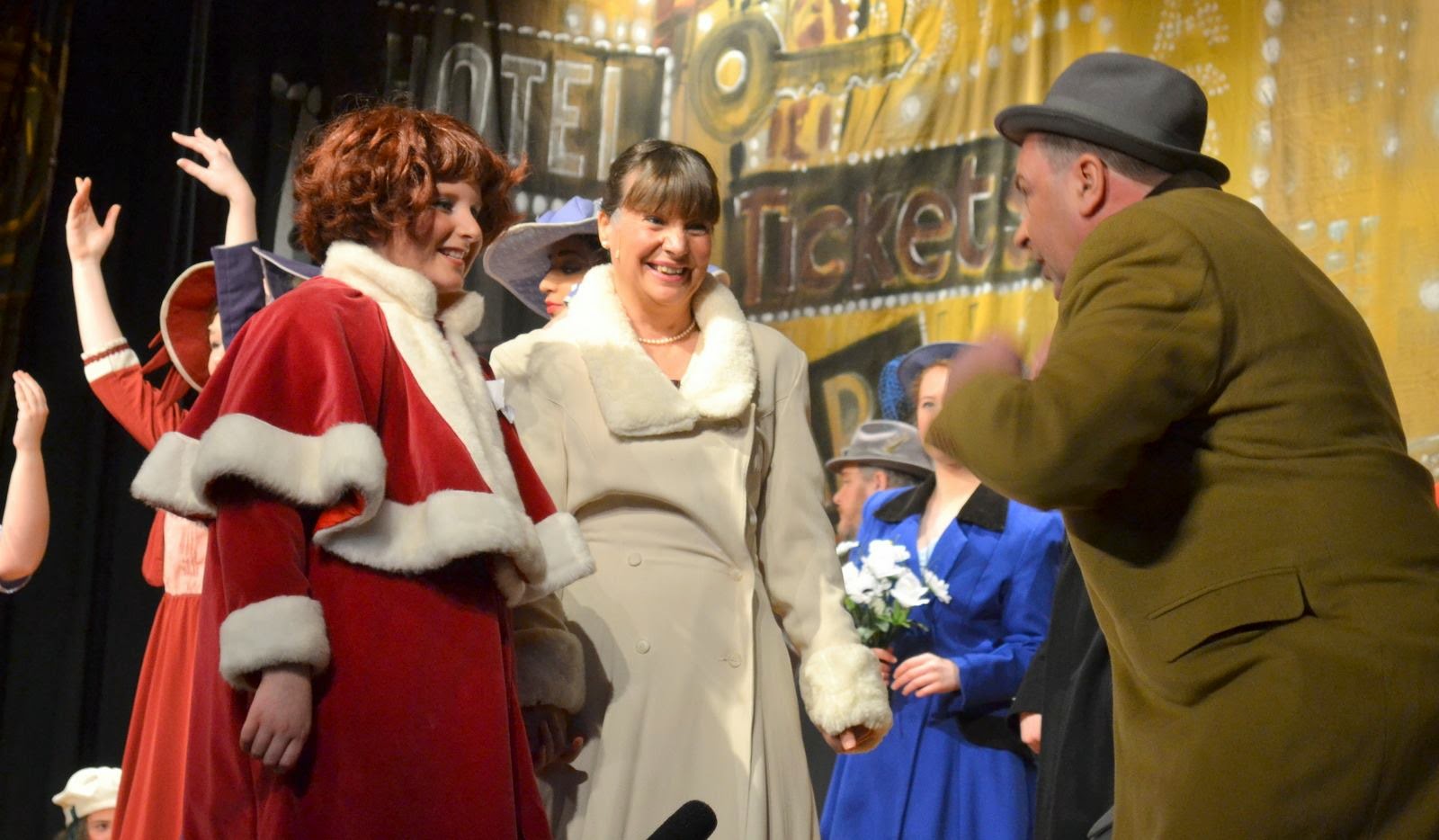