'You Can't Stop The Beat' of Galashiels Amateur Operatic! 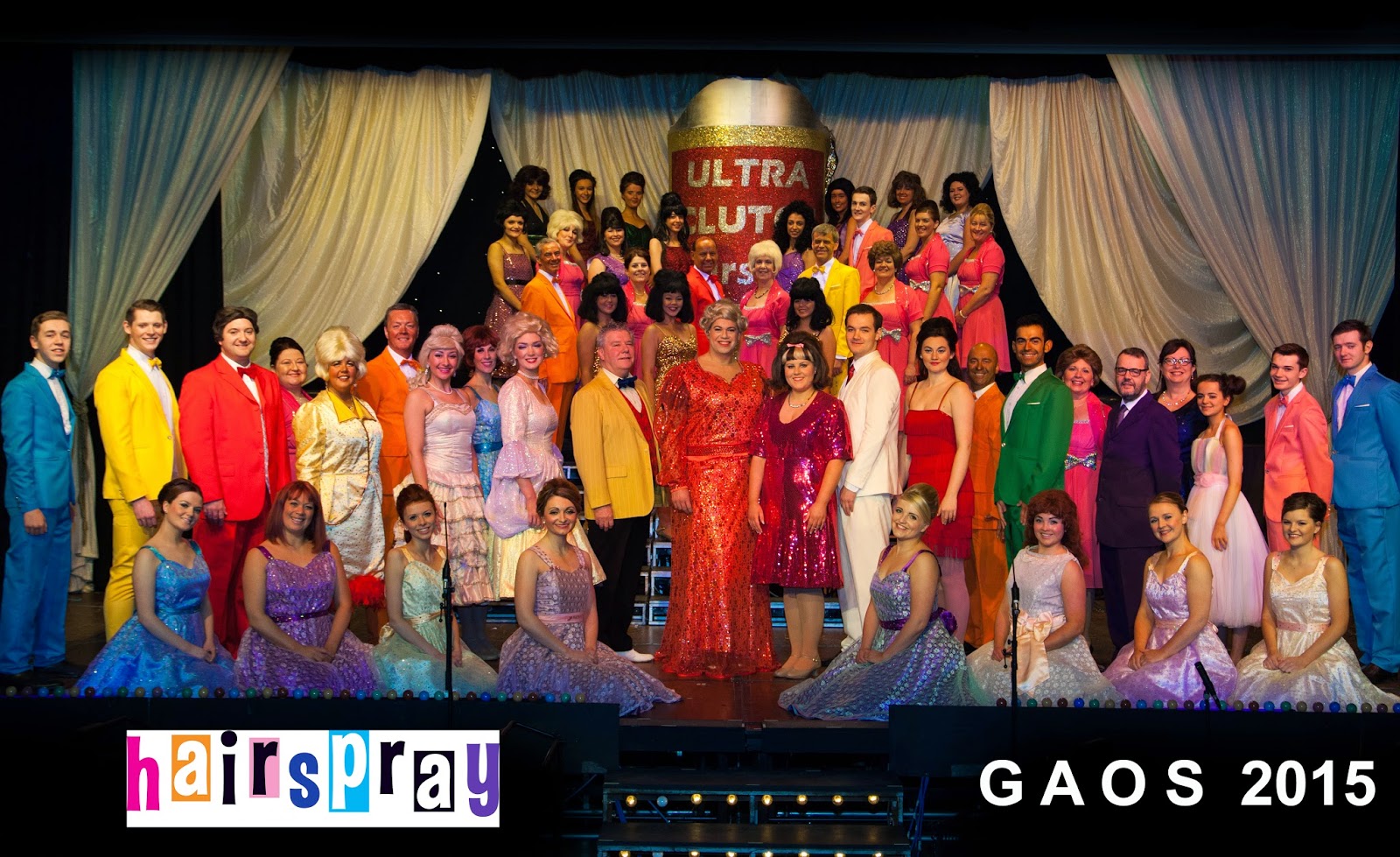 Every year , if there's one show that I look forward to seeing the most it has to be Galashiels Amateur Operatic Society's production.
This year they took us all back to 1960's Baltimore as they performed the smash hit 'Hairspray' - a colourful, vibrant musical that deals with the racial tensions of post-War America with big doses of comedy, memorable songs and lots and lots of hairspray. 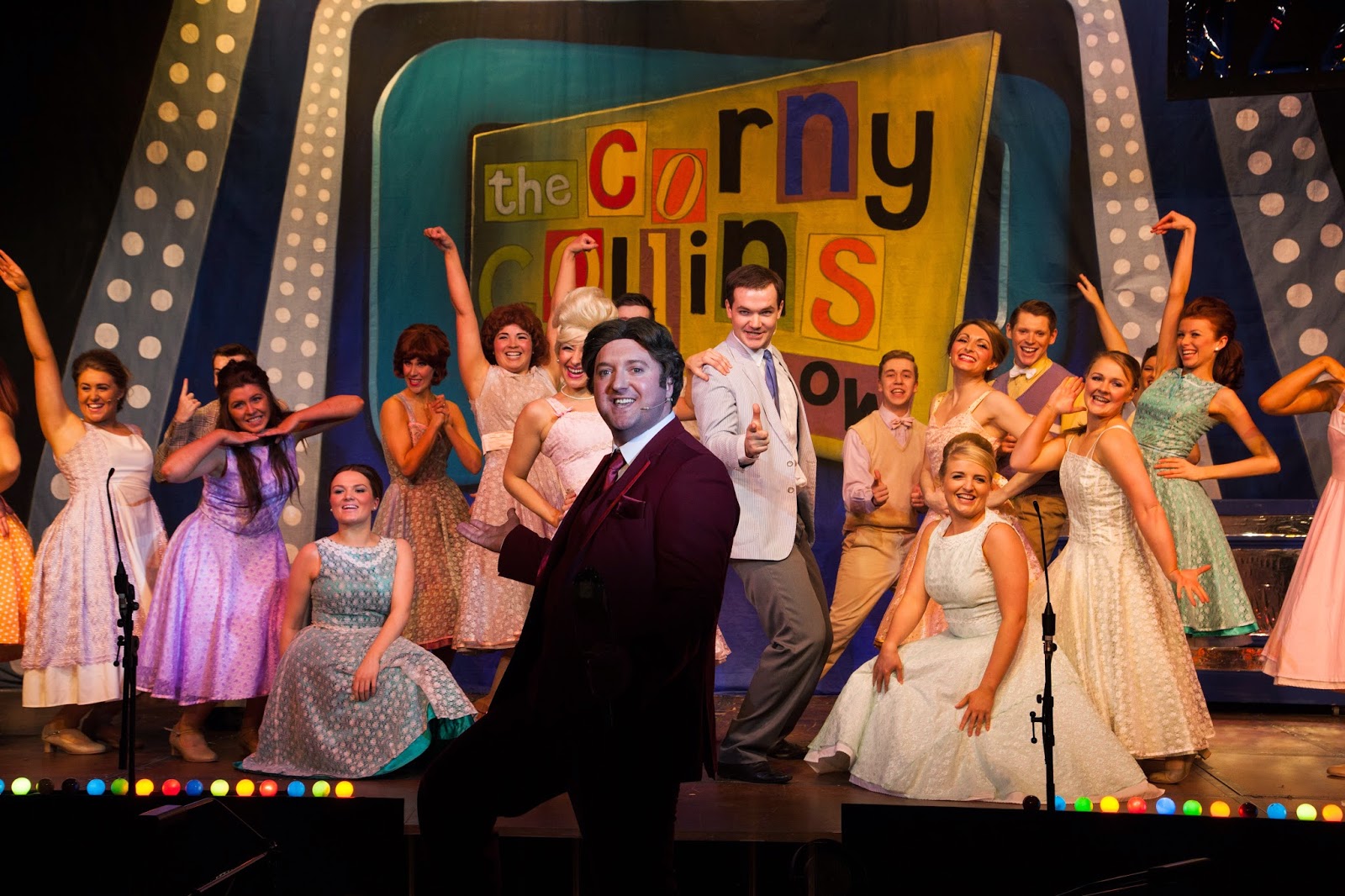 Every year Galashiels push themselves to put on their best show yet and this year the standard felt impossibly high - there's no point to beating around the bush as I can confidently say that without doubt Galashiels managed to surpass even their own impeccably high standards and put on a show that had our mouths gaping open in amazement.
With professionally choreographed routines, impeccable styling and costumes, fantastic sets (supplied by us, just sayin') and an incredibly talented cast their production went beyond the standards of just being a really really fantastic amateur show and would actually comfortably rival this years professional tour. 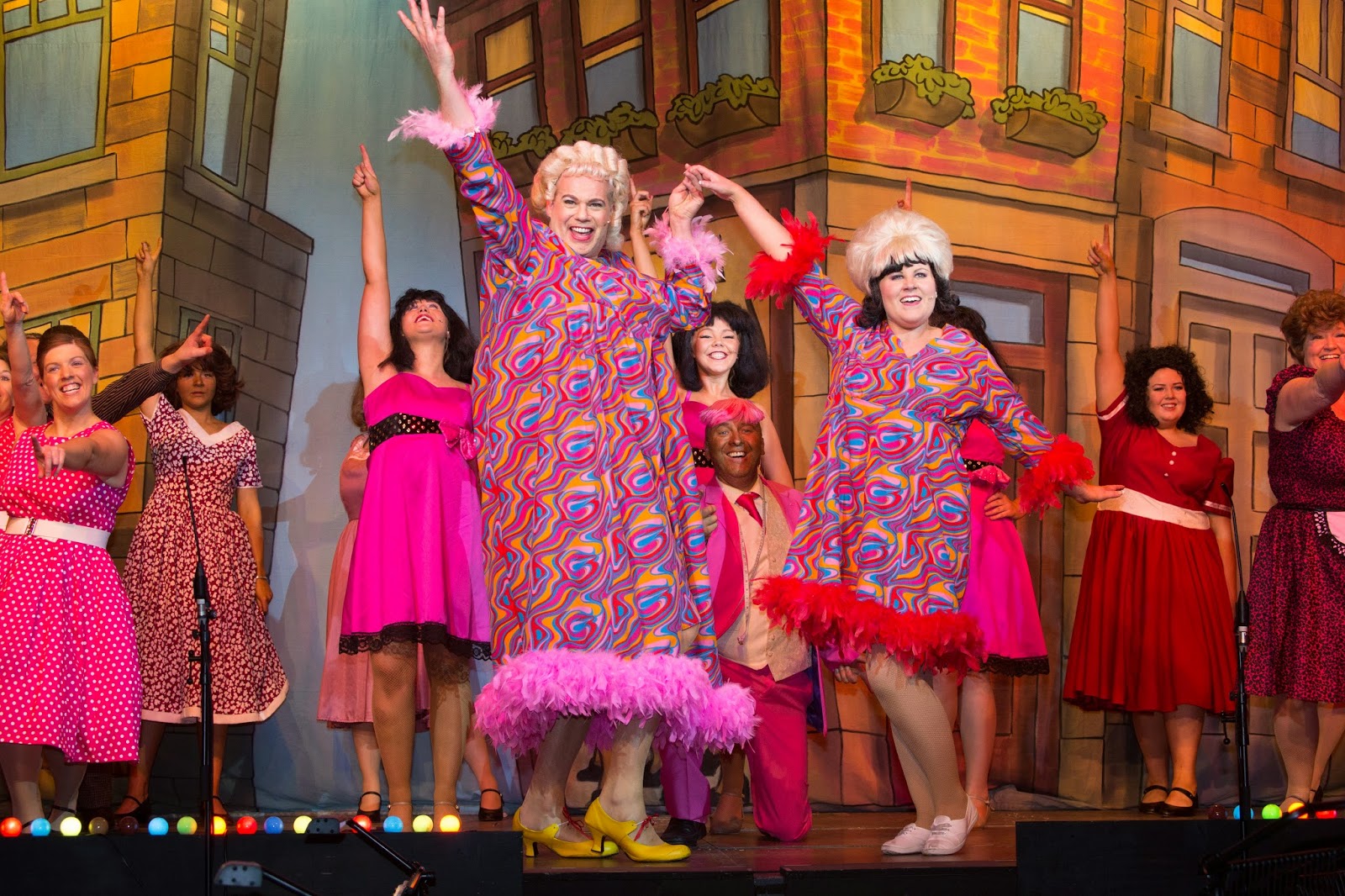 I actually feel sorry for the professional actors who are cast in these roles as I feel I will be judging them based on Gala's performances, however maybe not as sorry as I feel for the members of GAOS who now have to top this with next year's production of 'Sunshine On Leith'. Good luck guys - get some rest before you start it all again in a few months!

Gala AOS have a fantastic range of members and so are uniquely positioned to be able to perform almost any show - we are well aware of the problems many societies face of not having enough men. This is definitely not the case for Gala who have a strong & talented cast made up of all ages and genders - this year the lead role went to Kayley Henderson who starred as Tracy Turnblad. Last year Kayley had been part of the chorus for 'Half A Sixpence' so it was great to see her showcasing her talents in a lead role. She gave a fantastic and exuberant performance - not only easily handling the extensive vocals (i'm sure the half time intermission was a welcome break!) but also delivering a very likeable and funny performance. Maybe not all will agree with me but I find Tracy Turnblad can often come across as being deeply annoying (sorry!) an emotion which I feel intensely when I watch Nikki Blonsky's performance in the hit film. This was not the case with Kayley's performance, seeing her and Jan Baird, who played Penny Pingleton bouncing around on stage together definitely made you want to backcomb your hair back and be a part of Tracy's gang. This vivacity was not exclusive to the lead's performance however - the whole cast seemed to run on a supply of boundless energy. There were smiles all round as they bopped their way through some really extensive and impressive choreography and they kept it up throughout the show - not even lagging during their big finale. The show certainly finished with a bang and I was left feeling exhausted just from watching them all - in a good way of course. It certainly motivated me enough to go out for a run the next day.

Kayley was well matched as returning lead Clark Eaton Turner wooed her as teenage heartthrob Link Larkin. As he crooned to the audience and the ladies in the cast swooned at his feet (quite literally for Penny Pingleton at one point) it reminded me of the old footage of bands like The Beatles in their heyday - Clark Eaton Turner certainly has the same confidence and charisma when on stage and was well cast as Link. He even managed to pull off a white guitar without looking like a cruise ship crooner or a member of The Shadows and on that achievement alone Clark, I must say well done.

Also supporting Tracy were her friends Penny & Seaweed - both of whom
contributed to some of the funniest moments of the evening. Jan Baird has a very natural talent for comedy and her performance extended through all aspects of the production - she'd even put her own Penny-style spin on some of the dancing & the way she moved around the stage - even when the spotlight wasn't on her character. Seaweed, played by William Pearson, was also able to pull off his role with ease - there was some moments when the combination of the questionable dance moves & the cheesier-than-a-cheese-puff lines could have led to some serious corpsing but he kept it together throughout the show & delivered without a shade of self consciousness. His onstage Mom, the formidable Motormouth Maybelle was played by the fantastic Shelley Foster who delivered some powerhouse vocals & gave an authentic performance - her performance of 'I Know Where I've Been' was emotional and flawless, whilst her rhythms and rhymes brought the house down. The whole Motormouth family was completed nicely with Richeldis Brosnan portraying a sparky and feisty Little Inez. Mike Hyslop as Corny Collins also gave a strong performance - for his opening number there were a few technical issues with the sound however Mike carried on like a true professional, missing neither step nor note. He was very likeable and the audience definitely rooted for him as he stood up to resident racist Velma and battled for an integrated show. 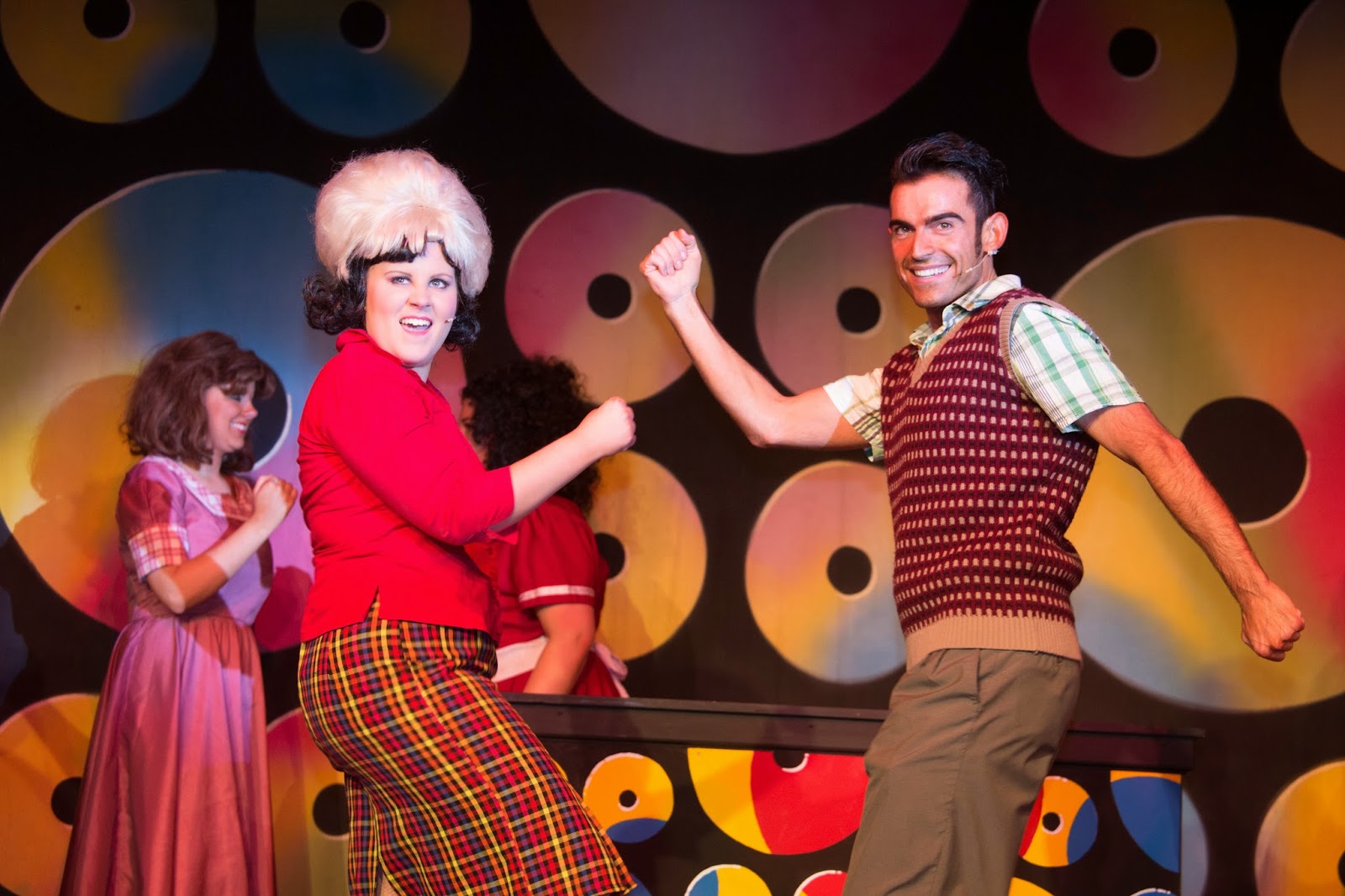 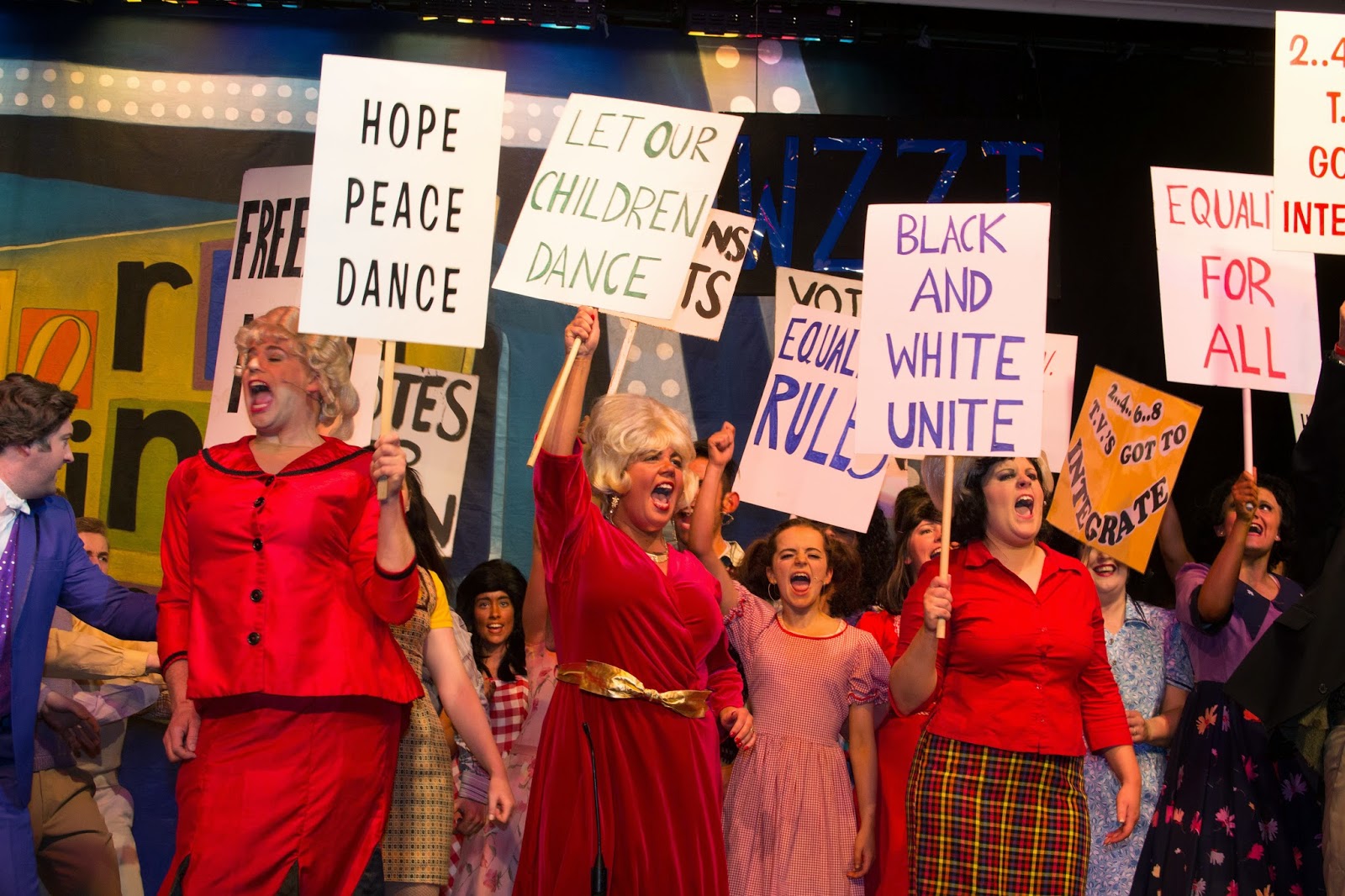 The protagonists -mother and daughter team Velma and Amber von Tussle were played by GAOS veterans Ruth Davidson and Carla McColgan. This pairing worked extremely well with Ruth giving a flawless performance of the manipulative Velma (a former Miss Baltimore Crabs don't cha know) whilst Carla was consistently squirm-inducing with her portrayal of the spoilt, pushy Amber.
However of course the best pairing of the night had to be Tracy's parents - Ivor Lumsden and Alaistar Waddell as Edna and Wilbur Turnblad, who not only gave the biggest laughs of the night but also performed the sublime 'Timeless to Me' which even without the jokes is still a very touching song. The comedy timing between the two was absolutely spot on and provided a fabulous foil to some of the more emotional parts of the show. There was also a great chemistry between them which made for a believable romance - you can imagine 's happy go lucky prankster Wilbur sailing through life with the feisty Edna by his side. Really they need a sequel of their own - did the Har De Har Hut's survive? Did Edna's dress making business take off? This is the problem with these great musicals - you always want to know what happened to the characters after they achieved their Happily Ever After - hopefully nothing along the lines of 'Into the Woods'!


Of course we can't go without giving a special mention to our very own Graeme Lilley - by day he dispatches backcloths and prepares your scenery but by night he glides across the stage in a bubblegum pink suit. As part of Corny Collins' gang Graeme was at the forefront for many of the scenes and confidently showcased his acting skills, as well as his dancing talents. There was all manner of complicated lifts, steps and choreographed pieces that Graeme, and the rest of the cast managed to master & deliver without so much as a batting of an eyelid. The team behind 'Hairspray' - including choreographer Marie McCullough and Musical Director and P Jeff Thomson totally pulled the stops out for this show and they really did deliver. There was a polish to the performance that can only be achieved by months of hard work and every single member of the cast had absolutely put there all into it - on the night the cast were word & step perfect with
not one chink in the chain showing, if there was any at all. 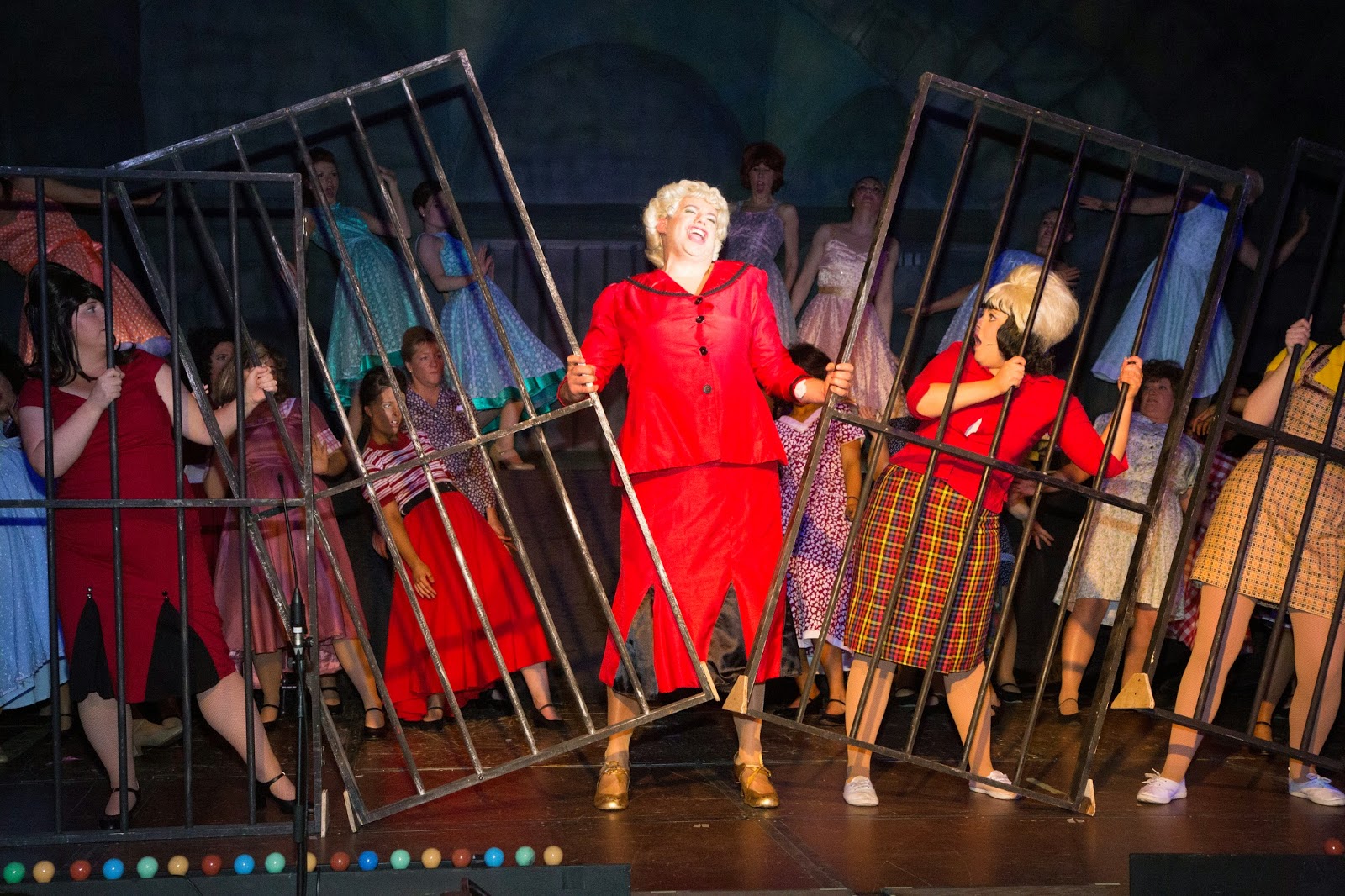 The cast had been beautifully costumed by Ewan at Utopia Costumes. The costumes complimented our sets perfectly and the overall effect was fantastic - bright colours, happy faces and a clear enthusiasm for what they were doing. Visually the show looked stunning and I'm pleased to say that the performances definitely matched this - in fact I'm not even sure that I can go on as I'm running out of adjectives and well aware that I'm laying it on so thick that I need a trowel. A piece of stagecraft that I really enjoyed was the use of a video camera on stage to connect The Corny Collin's Show to the TV in Tracy's parents apartment - in black and white of of course. It helped sync up the two locations and I thought it was an effect that worked really well and was a nice added extra.

All we can say really is a huge congratulations to everyone who was involved with Gala's production of 'Hairspray' - the quality was outstanding and we just don't know how it can be topped next year. However I'm sure you'll all give it a good go and I'm looking forward to coming to see 'Sunshine on Leith' next year! Well done Gala AOS - in the words of Gary Barlow - that was absolutely fantastic!

Sheila Scott is based in the Scottish Borders and takes fantastic pictures - not just of the local shows but for local events, weddings, private photo shoots etc. If you're in need of a friendly, reliable and professional photographer then get in touch with Sheila via her website and see examples of her latest work. You can also order pictures from this year's production of 'Hairspray' and relive your moment in the spotlight!
Don't forget to also like her facebook page and ours too!

If you're thinking of doing 'Hairspray' for your next show then please get in touch to receive a full colour brochure of our plans and pictures.