Immerse Yourself - A New Way to Engage Audiences

For many years pantomime season has been the bread and butter of the amateur theatre world.

The festive period is the busiest time of year for us as scenery suppliers and also vastly successful for amateur companies as you can often really rely on the fact that whatever panto you choose to put on you can depend on getting plenty of bums on seats as people attend their local panto regularly year after year.
The key to panto’s popularity with its audience is the fact that the shows themselves are very interactive and depend on the audience’s participation, as well as offering a full escapism into a different world. It’s that feeling of involvement that appeals to so many of the people that attend a pantomime each year, and audiences come out of the theatre feeling like you’ve all shared a great laugh together, and whilst watching a panto you also become immersed into a new world. Unlike viewing a piece of theatre that addresses hard issues or has the characters overcoming terrible struggles, for example ‘A Streetcar Named Desire’ which is a wonderful play but also very distressing, in pantoland you can rely on the fact that good always triumphs over evil in the end and that the land of ‘Far Far Away' is always very cheerful, hence offering a form of escapism from the drudgery of day to day life.
The success of how audiences respond to this involvement is clearly something us in the amateur world have recognised and known for years and it now seems like everyone else is finally catching up as interactive theatre outside of pantomime is enjoying a surge in popularity at the moment.

This post was prompted by an article in this months Elle Magazine which looked into ‘the best new cultural experiences that put you at the heart of the action’ – a pick of events currently on in the UK which offer you something slightly different for your money – think quirky locations and improvised performances. 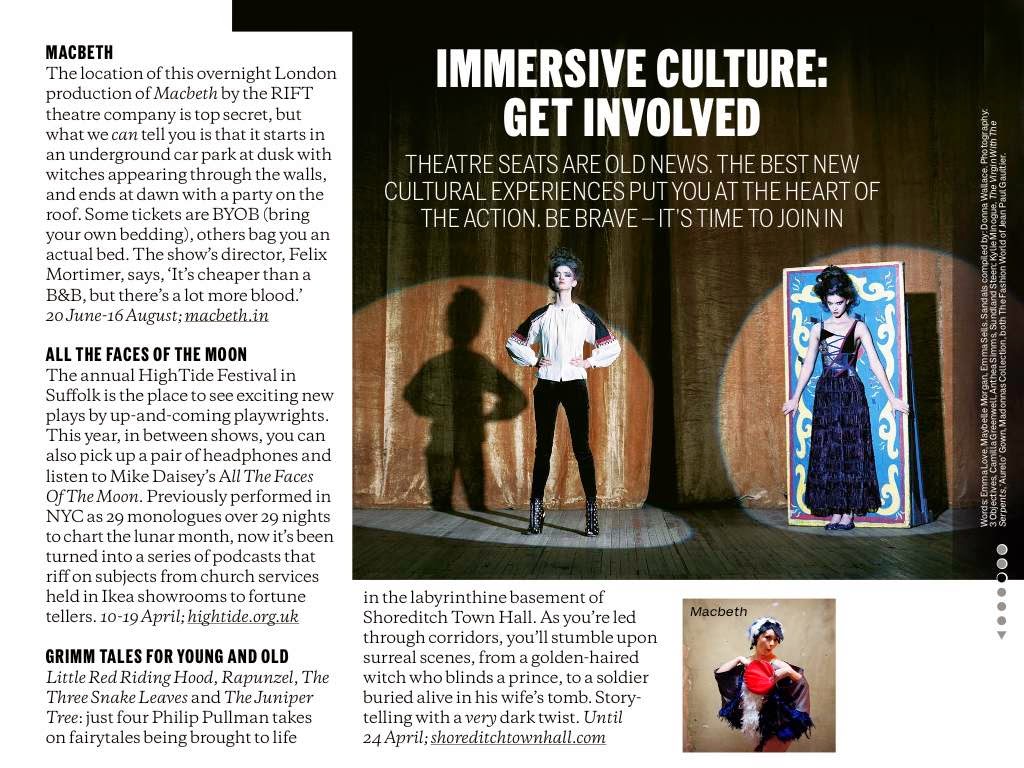 The shows that they list cater to a multitude of different tastes from ‘Macbeth’ being performed in a carpark to a boutique festival.
(On a totally different note - the Macbeth tickets are delivered as little passports - how awesome is that? You know you're going to see something really special when the tickets are a bit different)
These are the kind of shows that I love to go and see as it takes you out your comfort zone – in a theatre you can rely on the safety of the seats but when out in the open who knows what’s going to pop up where! Even just being in a strange location can enhance your involvement in the piece as it blurs that barrier between actors and audiences.

To run alongside the article in Elle we thought we’d recommend some other similar events and experiences that we would recommend if you fancy dipping your toe into something a little bit different and seeing for yourself what the hype is about – without having to gather at midnight in a disused warehouse or creepy carpark.

Punchdrunk are considered to be the real pioneers in immersive theatre at the moment and specialise in creating ‘theatrical experiences’ where the audience can choose what to watch and where to go – often being given free reign across the set. This month they have put together ‘The Drowned Man: A Hollywood Fable’ alongside the National Theatre.

Promising to tread the line between illusion and reality attendees are advised to ‘wear comfortable footwear’ but if you’ve got images of a bunch of drama graduates in leotards running around a dimly lit space then you’ve definitely got the wrong idea. Punchdrunk are the people you want to see to put your faith back into experimental theatre. 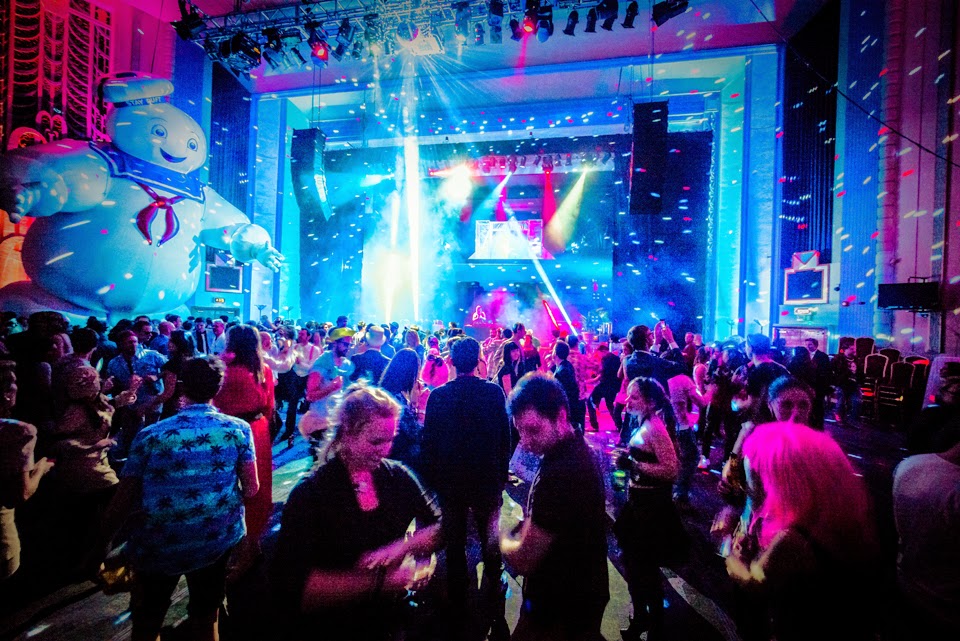 For people who want an added theatrical experience on top of a more regular activity then one of our top recommendations is to go check out the events run by Future Cinema as well as their sister company Secret Cinema.
Future Cinema promise to offer ‘cinematic experiences like no other’, and this is a promise that they definitely deliver on.
Combining screening popular films with an added theatrical experience their screenings are in absolutely huge demand. Charlotte Skeoch of The Huffington Post wrote that attending Future Cinema is ‘like being dunked head first into your favourite guilty pleasure.’ Each location is decorated appropriately and in extraordinary detail and the screening is combined with actors physically acting out scenarios alongside the film. It’s essentially a themed event on acid as everything is planned down to a T, from the costumes that the organisers wear down to special effects within the film (I believe a lot of slime was involved at their showing of ‘Ghostbusters’) and the menu and drinks that are on offer are all in accordance with the themes in the film. Charlotte Skeoch rightly explained the event as being ‘multi-sensory’ and in my book the added elements make it much more of a fun escape then just plonking yourself down in a dark room at the regular cinema.


Secret Cinema also offers the same immersion into the film – however the catch is that often the film is left as a complete mystery so who knows what world you’re going to end up being dunked in!
I'm already breaking the first rule of Secret Cinema as their website proclaims 'tell no-one.'
Secret Cinema’s latest offering was its recent showing of Wes Anderson’s (our favourite! See our blog post here) new film ‘The Grand Budapest Hotel’.

The event held for ‘The Grand Budapest Hotel’ encouraged those attending to dress up in costume and the location, actors, décor and food and drink were all chosen to recreate films and references from the film.

The popularity and success of both of these events shows that people are definitely interested in exploring a more ‘hands on’ style of theatre – people enjoy being involved and having people taking part can turn what could be considered quite a solitary activity – such as attending a cinema, into a real social event. In short, audiences now want the full experience of being immersed totally into a different world – escapism taken to the next level!
Of course, as I mentioned before, all of us theatrical folk have known the appeal of audience involvement for years but perhaps this suggests we can all look forward to a new golden age of theatre.
A big question could be is could we enhance amateur theatre shows further? Even something little such as the staff working at the theatre being in costume would certainly be a talking point for the audience while they gather before the  show and would help establish an atmosphere before the curtain was even up – the world that the show is set needn’t begin and end at the front of the stage, it could be good fun to sneak a few added extras into the theatre itself.

These theatrical elements already have a real foothold outside theatre itself as institutions like museums often capitalise on the fun factor by having actors dressed as figures from history giving demonstrations or guided tours.

The 'Back to Front Weekend by Yinka Shonibare' event at the Foundling Museum in London that we helped out at saw the museums staff put together a weekend celebrating the museums past and engaging the local community. The entire staff team dressed in authentic costumes from the period and collaborated with local schools in a role reversal weekend where the children, also in costume, gave tours and acted out small skits – as well as learning about the Foundling Museum’s origins.
The weekend was a huge success and even included performances given by students from RADA who gave sword fighting demonstrations and re-enacted scenes from popular plays.
It was a great weekend, and a huge success for the museum – many visitors commented on how lovely it was to see people sweeping around in their costumes and how it really enhanced how they experienced the museum. It also attracted a lot more visitors who had only heard about the museum through its promotion of the event!

The success of events like these are encouraging more people and businesses to use a more theatrical element or create an experience which they can use to promote their products or exhibitions and it’s a technique which really goes hand in hand with this decade’s craze: viral marketing.
All across the UK you can experience the theatrical outside the theatre with well known success stories including the ‘Dungeons’ experiences which are scattered across the uk in cities including Edinburgh, York and London and even the upcoming ‘Vikings Live’ that the British Museum have put together to promote their current exhibition ‘Vikings Life and Legend’ – where they’ve even sailed a longboat down the Thames! It even boils down to people handing out flyers on the street while dressed in a costume – if anyone has seen the costumed actors advertising the Edinburgh ghost walks then they’ll know that they truly help to establish a chilling and unnerving atmosphere!

I definitely think that interactivity only enhances an audiences experience further and is something we can all embrace – but if you’re not too sure and do fancy dipping your toe then our (and Elle magazines!) fantastic recommendations for shows and events are definitely all good places to start!

Have you experienced an interactive or themed event or seen a fantastic show lately? Let us know with a comment below and share the knowledge!